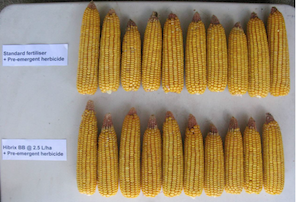 In Bowen, Queensland, in 2010, Hibrix was compared with a high NPK mineral fertiliser program for the production of maize cv. Hycorn 675IT on an alluvial sandy loam soil irrigated via sub-surface drip tape. At commercial harvest, cobs from 20 randomly selected plants per plot from were harvested, weighed and the length, girth at the cob base and length of tip not filled with kernels was measured. The grain was removed from each cob and weighed. A subsample of 100 grains was selected from the grain from each cob and weighed to determine mean grain size per cob. HibrixBB at 2.5 L/ha applied at sowing in conjunction with the use of a pre-emergent herbicide produced a commercially acceptable maize crop.

The nutrient input costs of Hibrix is less than 20% of your current fertiliser.
Click here to read the report summary.