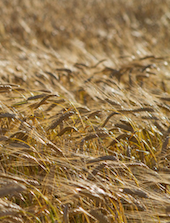 At Northam in the central wheatbelt of Western Australia in 2014, wheat cv. Eradu was sown into a wheat stubble paddock to evaluate the effects of various rates of fertiliser in combination with Hibrix BB. Agras fertiliser was banded below the seed at sowing at 0, 25, 51, 75 or 99 kg/ha whilst Hibrix BB was applied to half of each plot as a broadcast soil spray at 2.5 L/ha two days after sowing.